View original article by Gretchen Sparling at Bryan on Scouting.

What’s one way to recruit more Scouts? Virtual reality, according to the Northwest Suburban Council in Illinois.

Instead of simply telling prospective Scouts and parents about the exciting experiences awaiting youth in Scouting, the council partnered with 900lbs of Creative, an experiential marketing company, to showcase a “High Adventure Base Virtual Reality Experience” on Saturday at suburban Chicago’s Woodfield Mall. 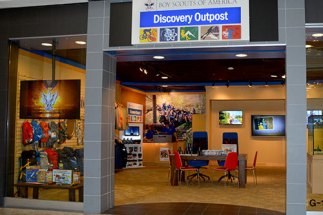 Read more about the Discovery Outpost, a Scouting store in Chicago-area’s Woodfield Mall, in the January-February issue of Scouting magazine (available Dec. 15).

Thanks to Oculus Rift headset devices streaming 360-degree footage from the Summit Bechtel Reserve, boys and their parents zoomed down the Summit’s Big Zip at speeds up to 50 miles per hour.

This exhilarating experience let more than 200 mall visitors — many of whom said they were unfamiliar with Scouting — “test drive” one of the exciting adventures awaiting youth in the Boy Scouts of America.

This event is just one of many efforts Northwest Suburban Council is making to reach more Scouts. Earlier this summer, the council opened Discovery Outpost, a location at the Woodfield Mall specifically designed to introduce visitors to Scouting. With more than 23 million mall visitors a year, the outpost serves up Scouting to lots of new eyes, and events like the virtual-reality experience continue the council’s mission of recruiting new families to the movement.

Since the facility’s opening, Discovery Outpost has collected more than 650 names and contact information for potential new Scouts.

Didn’t make it to the High-Adventure Base Virtual Reality event this weekend? Stay tuned for more activities at the Woodfield Mall’s Discovery Outpost at the post’s Facebook page.

Plus, keep your eyes out for the upcoming January-February 2015 issue of Scouting magazine, which will detail the council’s “storefront Scouting” effort at the suburban Chicago mall — including how the outpost was funded, the outpost’s mission (hint: the focus isn’t on retail) and how this strategy might be suitable for other councils’ outreach programs. The issue will be in mailboxes starting in mid-December. Don’t miss it!